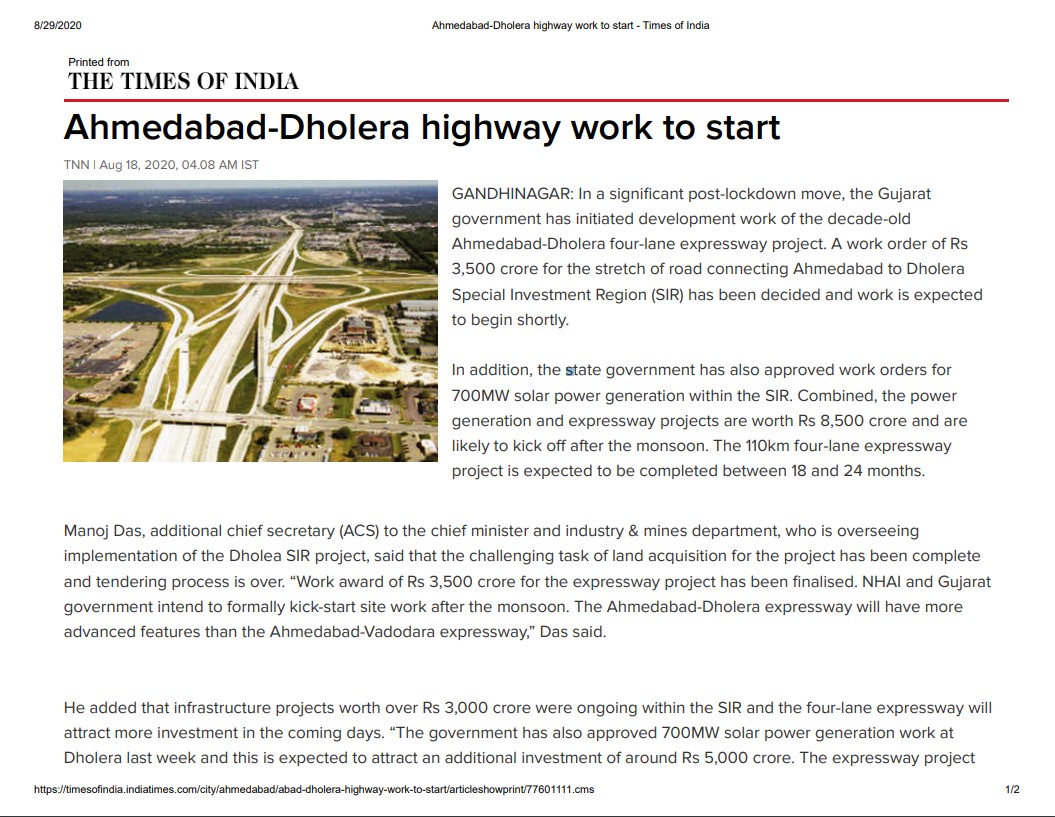 GANDHINAGAR: In a significant post-lockdown move, the Gujarat government has initiated development work of the decade-old Ahmedabad-Dholera four-lane expressway project. A work order of Rs
3,500 crore for the stretch of road connecting Ahmedabad to Dholera Special Investment Region (SIR) has been decided and work is expected to begin shortly.

Manoj Das, additional chief secretary (ACS) to the chief minister and industry & mines department, who is overseeing implementation of the Dholea SIR project, said that the challenging task of land acquisition for the project has been complete and tendering process is over. “Work award of Rs 3,500 crore for the expressway project has been finalised. NHAI and Gujarat government intend to formally kick-start site work after the monsoon. The Ahmedabad-Dholera expressway will have more advanced features than the Ahmedabad-Vadodara expressway,” Das said.

He added that infrastructure projects worth over Rs 3,000 crore were ongoing within the SIR and the four-lane expressway will attract more investment in the coming days. “The government has also approved 700MW solar power generation work at Dholera last week and this is expected to attract an additional investment of around Rs 5,000 crore. The expressway project and power generation project together will further attract investments in the SIR,” he claimed.

Commenting on the proposed airport at Dholera, the official said, “Land filling work for Dholera airport development work will start shortly. Despite the global impact of Covid-19, we are receiving encouraging response at Dholera and we expect significant investment in coming days in Dholera SIR.’’

The Ahmedabad-Dholera SIR expressway project had been facing delays because of opposition to land acquisition. Earlier, the project had run into other roadblocks as well. The project had been initially planned under BOOT ((build, own, operate, transfer) basis, but the government decided to develop it directly, as no developer had shown interest.